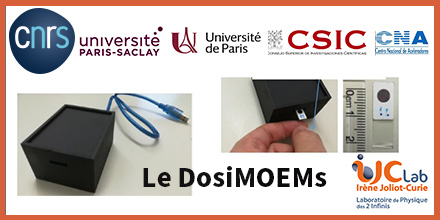 In collaboration with the CSIC (Spain), Consuelo Guardiola (Physical Health Pole, Radiation and Living team) recently filed a patent based on a micro-opto-electromechanical system (MOEMS) to measure the dose delivered to patients exposed to radiation ionizing agents for therapeutic purposes.

In radiotherapy, an accurate assessment of the dose delivered to patients is essential. Traditionally, radiochromic films have been used to verify the dose delivered by beams of photons, electrons and ions by determining how this dose was absorbed as a function of depth. Due to their high spatial resolution, low energy dependence and near water equivalence, they are widely used for quality assurance measurements and process verification. However, they require post-irradiation treatment which takes at least 24 hours. This analysis delay precludes the use of radiochromic films for live and in situ daily dose assessments.

In response to these problems, the Physical Health Pole has developed a new MOEMS-based dosimeter which overcomes the limitations of processing radiochromic films by transforming a passive detector into an active sensor. The first tests in a low energy proton cyclotron showed that it could be considered to use this system for in situ dose evaluations.

A complete active detector that integrates matrices of MOEMs and films into flexible printed circuits is under development. This second prototype is part of a Déclic action (promotion systems within the CNRS) in collaboration with Nabil Karkour (Engineering Pole, Electronics Department, Analog and Microelectronic Developments service). Ultimately, this device will extend the clinical use of radiochromic films to verify the effects of radiotherapy treatments.