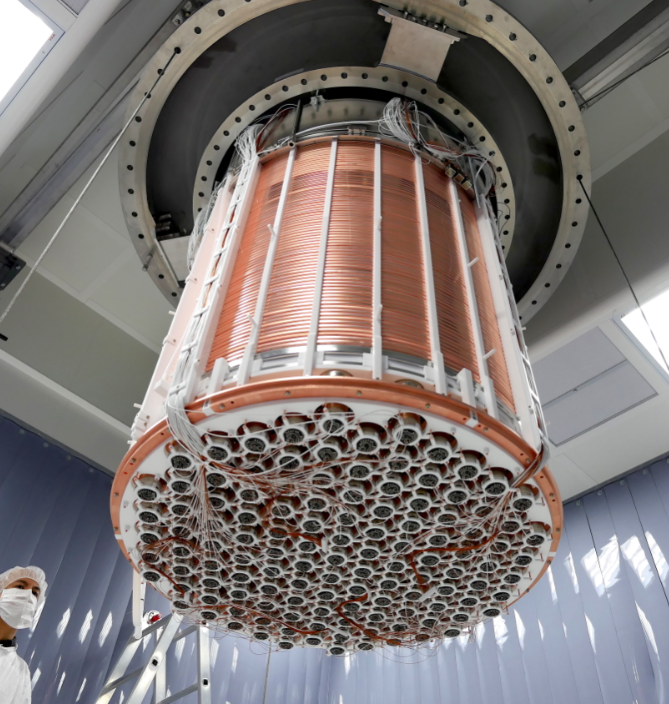 The world’s most sensitive dark matter experiment, XENONT1T, has observed an unexpected rate of events, the source of which is not yet fully understood. This experiment is carried out by the international XENON collaboration (28 institutions from 11 countries) in which IJCLab is involved.
So far, scientists have only indirect evidence of the presence of dark matter (around 85% of the matter in the Universe). XENON1T filled with 3.2 tonnes of ultra-pure liquid xenon, including 2.0 tonnes for the target, has been designed to detect each particle passing through the target ; it may collide with a xenon atom generating tiny signals of light and free electrons from the xenon atom hit by the particle.

Most of these interactions are produced by particles already known and observed. XENON scientists carefully estimated the residual number of background events. Comparing the data of XENON1T to backgrounds, scientists observed a surprising excess of 53 events over the expected 232 events. Several hypotheses could explain this excess, including the possibility of axions produced in the Sun : axions produced in the early Universe could also be the source of dark matter.

The next phase of the experiment is an upgrade of XENON1T called XENONnT. With more accurate data, it will help researchers to explain this excess, either at the level of a simple statistical coincidence, or perhaps, to discover the existence of a new particle or interaction beyond the physics currently known.