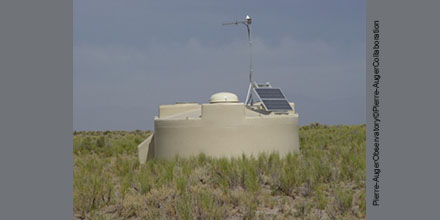 The Pierre Auger observatory is dedicated to the hunt for ultra-high energy cosmic rays which enter the atmosphere to generate large showers of particles detected by this observatory, in order to understand the composition of these cosmic rays and the mechanisms capable of to produce them. Located in the Argentinian pampas, it has existed for a little over 20 years and constitutes the largest instrument in the world, to detect on the ground the passage of the showers coming from these cosmic rays. The Auger collaboration studying these data is made up of 17 countries, or more than 400 researchers. Three IN2P3 laboratories including IJCLab have been heavily involved in this collaboration since the genesis of the project.

Events related to atmospheric electrical phenomena were discovered by chance at the Auger Observatory. They give rise to large footprints on the ground and signals of much longer duration than those of the cosmic muons usually studied by the observatory. Some signals seem to occur during thunderstorms. The morphology and origin of the 23 events collected in 15 years are not fully understood. Is the lack of signal at the center of the footprints physical or an instrumental artefact? What atmospheric phenomenon can accelerate particles to the energies necessary to produce the observed signals?

To answer these questions, two groups of the Auger Collaboration are working within the framework of the IEA (International Emerging Action) CALLiStO which began on January 1, 2021 for two years. This program, coordinated by Piera Luisa Ghia (A2C Pole, High Energy Astro-Particles Team) and Roberta Colalillo (INFN Naples, Italy) will study these phenomena by performing simulations to understand their origin.

See also : The Pierre-Auger observatory website
2021-02-03 11:12
We use cookies to guarantee you the best experience on our website. If you continue to use this site, we will assume that you are satisfied with it.OkNo