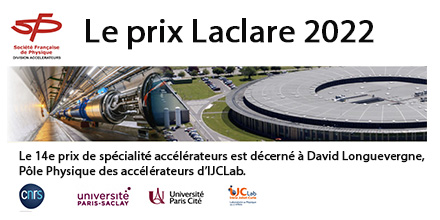 The Jean-Louis Laclare Prize of the Accelerators Division of the French Physical Society is awarded to David Longuevergne (Physics of Accelerators, Maverics Team) for his work in the field of Superconductivity in the RadioFrequency (RF) regime. The richness of David Longuevergne's background, the very high level expertise he demonstrates in the field of RF superconductivity, attested by his current involvement in a large-scale international project (PIP II), the contribution of his work on the deployment of SPIRAL2, and the progress of ESS and MYRRHA, led the jury to award him the 14th Jean-Louis Laclare Prize.

After his thesis "Study and test of a superconducting accelerating module for Spiral2 Project" at the IPN in 2009, David Longuevergne carried out a post-doctorate at TRIUMF (Canada) for two years during which he brought his expertise in superconducting linacs for the development of the 1.3 GHz activity of the E-Linac project. David Longuevergne has obtained important scientific results on superconducting accelerating cavities, such as the degradation model of the quality factor of accelerating cavities (used to qualify cavities within the framework of the SPIRAL2, ESS, MYRRHA projects), the development of piston systems agreement of the cavities of SPIRAL2 and studies on the polishing of the cavities.

David Longuevergne is national coordinator of IN2P3 for SRF activities and is involved in many projects around this theme of primary importance for current and future accelerators. He is also Project Leader for the CNRS contribution to FermiLab's PIP II project, he has participated in the Technical Commission of the Tesla Technology Collaboration (TTC) since 2019, and he is a member of the "High Gradient Acceleration" expert panel for the definition of the European Roadmap for Particle Physics.

Congratulations to David for this well-deserved award!