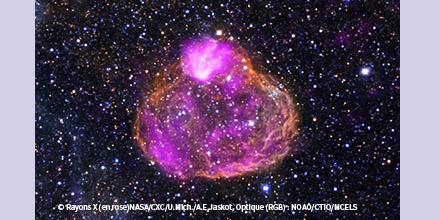 Almost 110 years after their discovery, a veil has been lifted over the origin of cosmic rays. By studying different places and mechanisms for their acceleration in our galaxy, a team of physicists involving the AC team of the A2C Pole, has just shown that the cradle of these cars is to be found in superbubbles of plasma at millions of degrees which form around massive star clusters.

Cosmic radiation is mainly made up of atomic nuclei, ranging from the proton to the heaviest nuclei, which originate mainly from the Milky Way and strike the Earth with energies often much higher than those reached in the accelerators of terrestrial particles. Gamma ray observations have shown that an acceleration of atomic nuclei takes place in shock waves generated by explosions of supernova stars. The precise scenario of the genesis of this flow of particles remained to be written.

The team studied the conditions necessary for the production of cosmic rays in the different phases of the interstellar medium. She showed that the acceleration of the contents of superbubbles by shock waves could explain the very particular chemical composition of cosmic radiation, which is different from that of the local interstellar medium. For example, there is a deficit of hydrogen and helium, an over-representation of refractory elements relative to volatile elements, or even a neon 22 to neon 20 isotope ratio five times higher than in the solar system. This last peculiarity is explained by the acceleration of winds of giant stars within the superbubbles.This scenario could hold other surprises. In particular, he could perhaps explain how cosmic rays are accelerated in our galaxy to phenomenal energies of 1016 to 1018 eV.

To know more: The article of Monthly Notices of the Royal Astronomical Society.