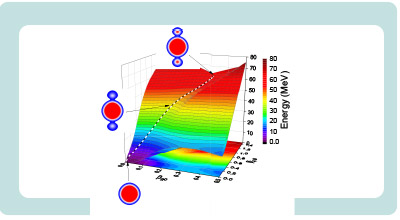 Do we know all the disintegration modes of the atomic nucleus? Nuclear systems are the seat of many phenomena because they involve the four fundamental interactions of nature: strong, weak, electromagnetic and gravitational. This results in a diversity of nuclear radioactivities, of which the alpha decay (the emission of a helium-4 nucleus) was the first discovery, in 1896. Since then, there are about fifteen radioactive modes, highlighted during the 20th and 21st centuries: beta, gamma, double beta, proton, double proton, cluster, etc.

A new mode of radioactive decay was thus predicted by members of the IJCLab Nuclear Physics pole (PhyNeT team), and collaborators from CEA, the University of Zagreb and Shenzhen: 2-alpha radioactivity, in which the parent nucleus simultaneously emits two alpha particles in opposite directions. This result was obtained using high performance microscopic calculations, which recently successfully described radioactivity to an alpha particle, and follows several works on the emergence of alphas clusters in the atomic nucleus, which can behave like a nuclear molecule.

Two-alpha radioactivity is predicted for several heavy nuclei, such as radon isotopes, with lifetimes compatible with the capabilities of current detectors. This work therefore opens the way to the possible detection of this new radioactivity, which can potentially involve several hundred nuclei, already known to be emitters to an alpha particle.