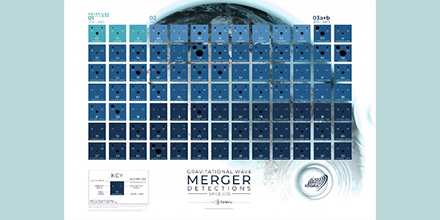 Following the data taking between November 2019 and March 2020, the LIGO and Virgo collaborations published in November 2021, the third version of their catalog of gravitational wave detections, GWTC-3. To the previous 65 detections, thirty-five new ones were added and are mostly binary black hole systems. We have also identified two mixed binaries (neutron stars and black holes) and one binary whose lightest star is in the so-called "mass-gap" area where neither neutron stars nor black holes are expected.

At the same time, four associated articles were proposed for publication, concerning the population of detected objects, the cosmological constraints associated with these observations, the monitoring of gamma-ray bursts and General Relativity tests. The Gravitational Waves team (Pole A2C) made a strong contribution to these various publications, whether it concerns the production of results or the writing of articles, in particular on the catalog itself and on the follow-up of the 86 gamma bursts detected during this period.

The LIGO, Virgo and KAGRA instruments are being modified to improve their sensitivity. Ultimately, they will be able to observe a volume of Universe ten times greater with the next data taking scheduled for one year from December 2022.