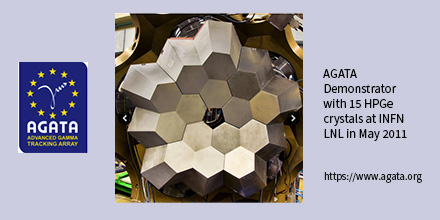 AGATA (Advanced GAmma Tracking Array) is a European collaborative nuclear physics project to build, maintain and operate a new cutting-edge instrument based on the one hand on segmented hyper pure Germanium semiconductor detectors and on the other hand on the concept of tracking γ. Only two detectors equipped with this technology are under construction in the world: AGATA in Europe and GRETA in the USA.

In conjunction with other instruments such as recoil nucleus separators and charged particle or neutron detectors, the unmatched resolving power of AGATA allows the nucleus structure to be probed by very high resolution γ spectroscopy in stable beams and radioactive. It is an instrument of choice for studying the atomic nucleus under extreme conditions of spin, excitation energy, strain and isospin with low or high γ multiplicity.

AGATA has been under construction since 2002 but it is still in operation for physics. After the demonstration phase (2002-2008), three great physics campaigns took place at Laboratori Nazionale de Legnaro (Italy), GSI-Darmstadt (Germany) and at GANIL since 2009. As part of this phase 1, the project could include up to 44 Ge crystals in the entire infrastructure of the instrument. Since the end of 2021, phase 2 has entered into force with the objective of finalizing the construction of a 4π detector (180 crystals) by 2030. It is in this context that AGATA is included in the national roadmap of Research Infrastructures!

IJCLab is one of the four French CNRS/IN2P3 laboratories within the AGATA collaboration. Researchers from the Nuclear Pole and engineers and technicians from the Laboratory's Engineering Pole are very involved in this project through the experiments they carry out during physics campaigns but also through technical developments. For example, IJCLab has full responsibility for the construction of the new acquisition system and the new STARE electronic boards, for the evaluation and improvement of the performance of the instrument as well as the upgrade of the algorithms tracking and PSA for phase 2.

For more information on the project, the official website of AGATA. Here find the AGATA White Paper.