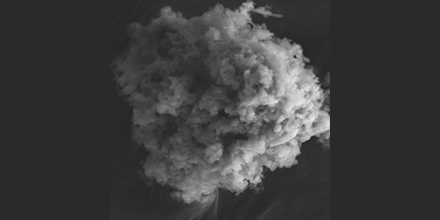 Micrometeorites from comets or asteroids have always fallen on our planet. This interplanetary dust, particles of a few tenths to hundredths of a millimeter, passed through the atmosphere, giving rise to shooting stars. An international program, carried out for nearly 20 years by scientists from CNRS, Paris-Saclay University and Sorbonne University within the IJCLab, ISMO, IMPMC / MNHN laboratories, with the support of the French Polar Institute (IPEV), and in collaboration with British and American colleagues, was able to determine that 5,200 tonnes per year of these micrometeorites reach the earth's soil. The study was just published in the journal Earth & Planetary Science Letters.

Six expeditions to measure the annual flow of micrometeorites falling to Earth were carried out near the Franco-Italian station Concordia, 1,100 kilometers off the coast of Terre Adélie, in the heart of Antarctica. They made it possible to build the Concordia collection of micrometeorites, ranging in size from 30 to 200 micrometers.

Julien Rojas (IJCLab, Pôle A2C, Équipe Astrophysique et Cosmochimie) analyzed the measurement of the annual flow of micrometeorites using data from three Antarctic expeditions and the study is published in the journal Earth & Planetary Science Letters. Micrometeorites represent the main input of extraterrestrial matter on our planet, far ahead of that of larger objects such as meteorites, whose flux is less than ten tons per year.

Comparison of the flow of micrometeorites with theoretical predictions confirms that most of them most likely come from comets (80%) and the rest from asteroids. This is all valuable information to better understand the role played by these interplanetary dust in the supply of water and carbon molecules to young Earth.