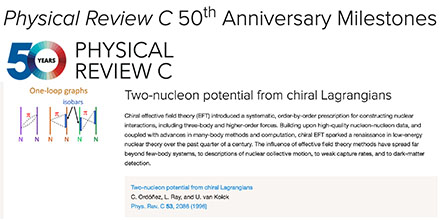 To celebrate the 50th anniversary of Physical Review A, B, C and D, their editors have assembled collections of landmark articles that "have opened up new avenues of research" and "remain at the heart of developments in relevant fields". In particular, they selected the article “Two-nucleon potential from chiral Lagrangians”, co-authored by Ubirajara van Kolck (Pôle Théorie). This paper was the first to derive nuclear forces from an effective low energy field theory describing quantum chromodynamics (QCD). QCD is the part of the Standard Model of particle physics that describes the interaction between quarks and gluons in atomic nuclei. Until this work, nuclear interactions were described in a purely phenomenological way and suffered from unknown uncertainties, hampering our ability to predict many nuclear processes.

According to the editors of Phys Rev C, “The effective chiral field theory introduced a systematic, order-by-order prescription for the construction of nuclear interactions, including three-body and higher-order forces. Based on high quality nucleon-nucleon data, and associated with advances in many-body methods and computation, [this theory] sparked a revival of low-energy nuclear theory in the last quarter of century. The influence of effective field theory methods extended well beyond few-body systems, with the description of collective nuclear movements, the calculation of low capture rates and the detection of dark matter."

See also : Le site des 50 ans de Phys Rev C
2020-11-18 16:24
We use cookies to guarantee you the best experience on our website. If you continue to use this site, we will assume that you are satisfied with it.OkNo